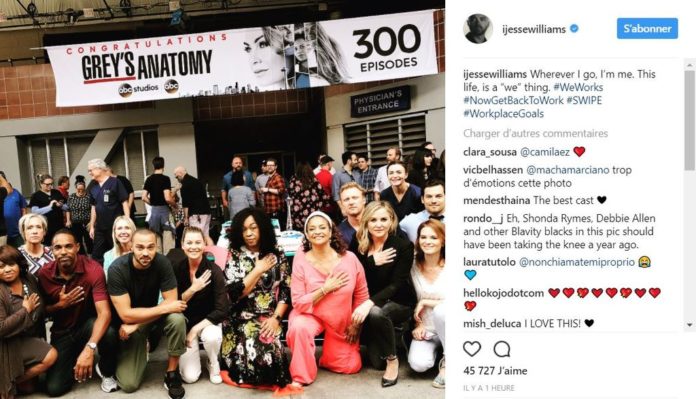 The cast of Grey’s Anatomy and Shonda Rhimes are joining the viral #TakeAKnee campaign. On Tuesday, the cast showed their support for the NFL as players and team executives protest racial injustice across the United States.

Shonda Rhimes, the producer, and screenwriter behind Grey’s Anatomy shared a photo of herself, Ellen Pompeo, Debbie Allen and Jesse Williams kneeling with their hands over their chest.

“And we took a knee in solidarity of racial injustice,” she captioned the snap, which was taken at the on during 300th episode party.

Pompeo shared her photo with the caption, “We kneel because we are supposed to be one nation under God, indivisible, with liberty and justice for all.”

Jesse Williams, who has been extremely vocal about racial injustices in America, also posted his photo with the caption, “Wherever I go, I’m me. This life, is a ‘we’ thing.”

The cast of Grey’s Anatomy are not the only stars showing their support for the NFL players after President Trump called any player who kneels a “son of a bitch.” The cast of X-Files, Pharrell Williams, and Stevie Wonder have taken knees in support of the cause.

…and we took a knee in solidarity of racial justice. #takeaknee #greysanatomy #300th