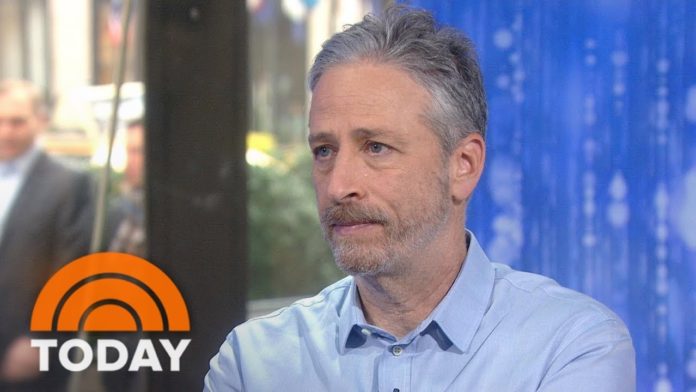 Jon Stewart and Night of Too Many Stars creator Michelle Smigel sat down on Today with hosts Matt Later and Savannah Guthrie to discuss the upcoming event, which takes place on Saturday.

The topic of conversation quickly turned to the sexual misconduct allegations about Stewart’s friend Louis C.K., which the comedian admitted to after a bombshell New York Times report confirmed several years of rumors.

When asked, Stewart replied, “Um… stunned, I think?” He continued, “You give your friends the benefit of the doubt, I try to think of it in terms of, I’ve had friends who have had compulsions and have done things, gambling or drinking, and drugs, and we’ve lost some of them, some of them have died. And you always find yourself back to a moment of, did I miss something? Could I have done more? And in this situation, I think we all could have. So you feel anger at what you did to people.”

“Look, comedy on its best day is not a great environment for women,” Stewart admitted. “I think it’s gotten better over the years, but certainly when we started 30 years ago it was really difficult, and so to do it was an act of bravery in and of itself.”

Later, the Daily Show host remembered the first time he had heard about the sexual misconduct accusations about Louis C.K., which he had been caught off guard with by an audience member while recording a podcast. “My first response was, what?” he said. “And then, joke joke, and as he kept going I was like, ‘Look, I know this is very serious, but I know Louie, he’s always been a gentleman to me’ — which again, speaks to the blindness that I think a man has, which is like, ‘Hey, he’s a good guy, what are you talking about?

When asked whether or not Louis C.K. has talked to Jon Stewart, Stewart replied, “No I haven’t. Yet. I haven’t.”