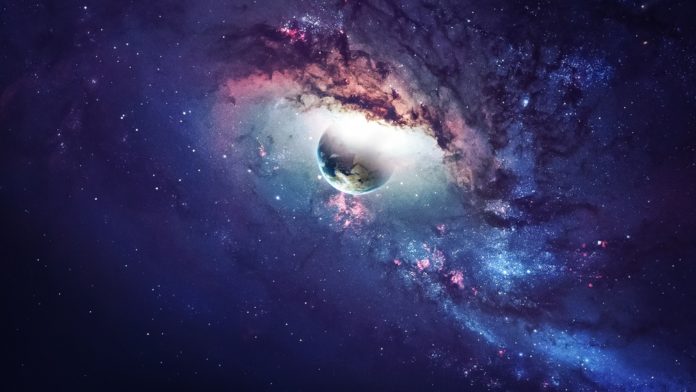 An exoplanet the size of Neptune was discovered orbiting close to its parent star, and researchers now believe that it has an atmosphere that contains both water vapor and clouds.

Researchers using both NASA’s Hubble and Spitzer space telescopes discovered the planet, which is located approximately 437 light years away from earth. The planet, which is called HAT-P-26b, circles its star once every 4.2 Earth days, meaning that it is probably tidally locked, with the same hemisphere is always facing the sun and the other side is always facing away from it.

While its size and mass are similar to Neptune, the planet is composed of mostly hydrogen and helium, similar to Jupiter and Saturn.

Researchers led by David Sing of the University of Exeter in England and Hannah Wakeford of NASA’s Goddard Space Flight Center in Greenbelt, Maryland, studied the planet transiting or passing in front of its star with two NASA telescopes.

“For this mass range, this is the strongest water-absorption feature that we have ever measured,” Wakeford explained in a statement with Space.com.

Researchers also discovered exotic clouds travel within the planet’s atmosphere. Unlike clouds on Earth, which are composed of water vapor, these clouds are consist of disodium sulfide, giving the planet’s sky a different appearance. “This would be a very alien sky that you would be looking at. These clouds would cause scattering in all of the colors, so you’d get a kind of scatters, washed-out gray sky, which is interesting if you were looking through these clouds,” Wakeford explained.

Data collected during the study also allowed for the researchers to measure the atmosphere’s consistency of other elements other than hydrogen and helium. Researchers found that the planet had a metallicity more like that of Jupiter and Saturn in our solar system. In our solar system, the bigger the world, the lower its metallicity is. Because HAT-P-26b does not fit that mold, researchers now believe they may have formed closer to the star and slowly drifted away.

“Astronomers have just begun to investigate the atmospheres of these distant Neptune-mass planets, and almost right away, we found an example that goes against the trend in our solar system,” Wakeford said in a NASA statement.

The findings of the study will be published in the May 11 issue in the journal of Science.