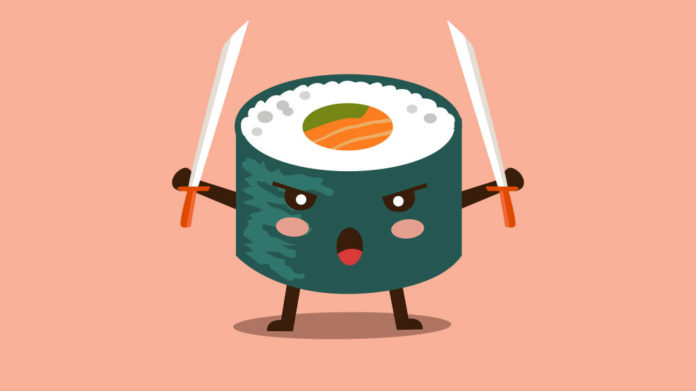 You may want to think twice before you order your next sushi roll. A paper published Thursday in BMJ Case Reports reports cases of a worm-like parasite being on the rise in the west coast of the United States due to the increase in popularity of sushi and other dishes involving raw food.

The report shares a case study of a Portuguese man who reported vomiting, fever and stomach pain.

When physicians asked if he had recently eaten sushi the man indicated he did. Doctors revealed they discovered anisakiasis larva attached to the stomach lining.

According to reports, anisakiasis is a parasitic worm that lives within squids, salmon, cod, red snapper, halibut and other types of fish.

Currently, there is no treatment other than surgery for anisakiasis, and the parasite can ultimately cause intestinal bleeding, bowel obstruction, vomiting, and abdominal pain. The best way to treat the disease is through surgery by removing parasitic larva that attaches to the stomach lining.

This type of parasite is common in Japan due to the prevalence of raw fish in the diet. The cases are starting to occur more recently the United States as more people decide to eat sushi and other raw and uncooked fish.

Researchers argue that to avoid getting the parasite people should purchase sushi only from high-quality restaurants. “Properly trained sushi chefs can detect anisakiasis larvae,” one doctor says. “They are grossly visible in the fish.”

Parasites on the rise in the U.S.

This news comes after a deadly parasite has been found spreading across Hawaii.  The parasite is called rat lungworm disease. The parasite targets and affects the brain and the spinal cord of humans.  Moreover, last January, scientists discover parasites in the United States caught salmon.